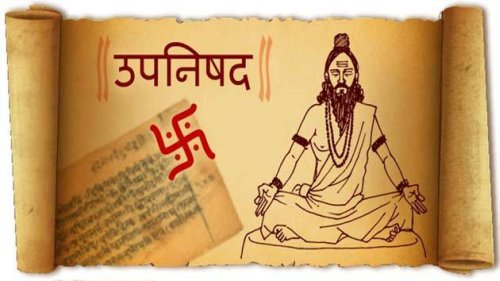 There are 108 upnishads, including all major and minor ones, written by our ancient Rishis. Some are big and some are small but in truth they all are great guides. Here, one is sharing a smaller upnishad known by the name of Amritnaadopnishat. It is on Yog and is being produced here below.

Om! May Brahm safe guard both of us (teacher and disciple), rear both of us together and we both should not enter into any kind of animosity.

It is the duty of knowledgeable persons not to waste this very small life span. By studying of scriptures and their repeated practices, it leads one to Vidya (knowledge). One should sit on the Chariot of Pranav and make Lord Vishnu as his Sakshi (observer), looking for the real thing of Brahmlok (realm of Brahm) one should immerse oneself in the bhakti of Lord Rudra. One should continue riding that chriot till the path is finished. When one reaches the end, one should leave that Chariot and move further on one’s own.

By meditating on the A-kaar etc. matras of Pranav, the cosmic world dependent on it and Virat , leaving them one should meditate on to Eshwar who is vachak(speaker) of swarheen (soundless) M-kaar. By such a practice, a sadhak enters into the Turiya state. This tattva is far from all the grossness. One should observe all the objects of the senses, senses itself and mind as the rays of sun like Atma. Thus one should leave all the inanimate and meditate on the animate. Such a kind of thinking is called Pratyhar.

In the various steps of Yoga where Pranayam, Dhyan, Dharana, Tark, Samadhi etc are named, Pratyahaar is also counted. As by heating Gold we get rid of all the impurities, in the same way to get rid of all the doshas of our senses. Pranayam is essential. By Pranayam all doshas are removed while Dharana helps us to remove all the sins. Thus removing all the doshas and sins, meditating on the form of Ishtadev one should continue breathing in and out. Chanting Gayatri mantra 3-3 times with Omkaar one should do Poorak, Kumbhak and Reachak.

Rechak is that in which Pranvayu is brought into the Akaash and its connection with the heart vayu and thinking process is broken. One should slowly breathe in air through the mouth as if drinking it through the capillary of a lotus stem. It is called Poorak. When no air is breathed in, no air is breathed out and the body is kept still, this state is called Kumbhak. As a blind man can see nothing, in the same way a sadhak should also act as if he is blind, he is deaf and keep his body like that of wood and remain still, such a state is called Prashant state. Thinking mind as sankalpatmak, one should offer it into Atma and consume it in Parmatma chintan (thinking of God), this is called Dharana. To meditate on the crux of the scriptures is called Tark. By entering it, when one realises all the other objects as of no value is called Samadhi.

In a clean, sanctified place sit in Padmasan or Swastikasan or Sidhasan or Bhadrasan whichever is suitable, face north direction, guarding ones mind one should do jap. Then closing one nostril with one finger, breath in through the other nostril. Then closing both hold ones breath. Meditate on effulgent Brahm form of Ekakshar Pranav and slowly slowly exhale. This should be repeated many times. At any one time, one should not do it too much at the beginning. Keeping ones Ishtadev above, below or in front of one and with still body one should practise this Yog.

This Yog should be practised daily as it gives quick fruit like the Taal tree. Twelve repetitions have been advised in it. This naad of Pranav does not arise with outside things. This is neither Swar nor Vyanjan. It is produced neither from throat-palat nor from nasal passage. It arises from Moordha and not from place of teeth. It never subsides, Pranav should be practised as pranayam and the mind should get immersed in the form of Naad continuously. Whichever path a yogi looks into his mind follows there alone. For mind to travel into the highest state, daily practise is essential. The entry point of air is the heart, from here only it enters into Sushumana. Above it is Urdhgami (upward going path) marg and above that is the doorway of Mukti in Brhamrandhra. Yogis call it Suryamandal. Leaving the body by passing through this path is called Mukti.

Fear, lethargy, excessive sleep, excessive food, excessive waking time, excessive anger and fasting is not good. A yogi who practises daily following such rules gets the ultimate knowledge. In four months, he gets Darshan of the devas, in fifth month goes to still higher states and if he desires, in sixth month he can attain Jivanmukt state.

Pran, which 30 ½ finger length long is the base of this pran vayu. In pran, which is evident to our senses 1,13,680 breaths come during 24 hours. Pran resides in Heart, Apan resides in Anus, Samaan resides in Navel, Udaan resides in Neck while Vyan resides in all the organs. Pranvayu shines like lohit mani, Apaan like colour of Indragop, Samaan like Godugdh(cows milk), Udaan like dhoosar varna and Vyan like the top of a flame of fire. A sadhak whose Pran piercing varius realms enters into this realm, he may leave his body anywhere, he will never enter into the cycle of life and death again, thus he is never born again.