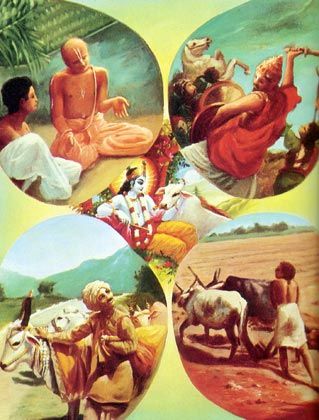 O divine beings, may we hear blessings with our ears, see blessed things with our eyes, with strong body and organs may we praise you all and whatever life-span provided us, that much we should enjoy. May Indra who is having great fame bless us. May the all knowing Dev Pusha bless us and Garud Dev, whose speed cannot be countered, should also bless us.

There are four ashrams which are further divided into sixteen divisions:

Brahcharis are of four type, namely 1.Gayatr, 2.Brahman, 3.Prajapatya and 4.Brihan. One who after accepting yagyopveet, eats food for three night longs without salt is called Gayatr brahmchari. One who remains celibate for 48 years for studying of four Vedas, spending twelve years in the study of each Veda, acquires its complete knowledge and also follows all the rules etc. during study is called Brahman. One who enjoys his wife only during season and remains aloof from all other women is called Prajapatya. One who till his death does not leave his guru is called Brihan.

Grihasth are also of four types: 1.Vartakvriti, 2.Shaleenvriti, 3.Yayavar and 4.Ghorsanyasik. One who does cultivation or rears cattle or does business which is totally legal and doing thus performs Yajna for hundreds of years and prays for Atma is called Vartakvriti. Those who perform yajnas themselves but do not help others to perform them; who study themselves but do not teach others, who offer alms but do not accept it themselves, doing thus for a hundred years and pray to their Atma are called Shaleenvriti. Those who perform yajnas and help others also to do them; who undertake studies themselves and also teach others, thus they spent their life of one hundred years praying to their Atma are called Yayavar. Those who for one hundred years busy themselves in Tapasya, performing Yajna and pray to their Atma always are called Ghor Sanyasik.

Sanyasis are also of four different kinds: 1.Kutichar, 2.Bahudak, 3.Hamsa and 4.Paramhamsa. Those who remain at a distance from their children and taking alms from the houses of their sons, they are engrossed in the chintan of Atma, are called Kutichar. Those who carry Trident, Kamandal, Kaupeen, Shikya paksha, water, keep shikha, asan, paduka, Yagyopaveet and wear only a few clothes and take alms only from the houses of good Brahmins are called Bahudak. Those who carry one dand, do not grow a shikha, keep Yagyopaveet, keep shikya kamandal etc, do not stay at any village more than one night, in any teerth or a city more than five nights, perform krich-chandrayan vratt more two – three times and keep themselves busy in meditating on Atma are called Hamsa. Those who roam around without dand, without hair, wear kantha and kaupeen, avyakt-ling-chinh, with mysterious ways, peaceful, dheer and acting like stupid though they are not, carrying tridand, kamandal, shikya paksha, sacred water, staying in barren houses or dilapidated temples are called Paramhamsa. For them there is no Dharma and no Adharma, no doings and no non-doings, no truth and no untruth, they have Sam Drishti, they are not affected by anything, they see a clod of earth, stone and gold as equal, they accept alms from all, free the Atma from bondage or are Sakshi to Moksha.