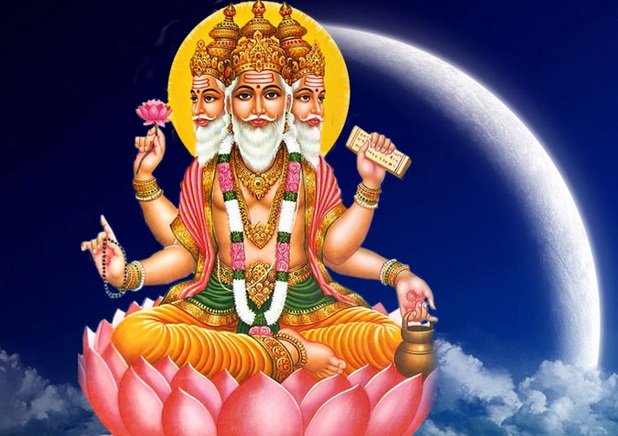 Once Shakal asked Piplad as to what was there at the beginning. To this Piplad answered That Brahm by the name of Sadyojat appeared first. Shakal enquired, ‘After that what came forth?’ Piplad replied, ‘ Vamdev’. Shakal asked if anything else also came later. Piplad replied in the affirmative and explained them as Aghor, Tatpurush and Ishaan, which are the creators of all Dev Yonis. Shakal again questioned, ‘How many Varnas, divisions and Shaktis of it are there?’ Piplad replied, ‘Such details must not be told to the unqualified.’ Piplad bowed to Maharudra who Himself has explained it to him.

O Shakal! Listen to what is the most secret knowledge of this world. It is Sadyojat which has Shaktis: Mahi, Rama, Pusha, Brahm, Trivrit, Aka, Ravi, Consonants(Vyanjan), Rik Veda, Gharpatya Agni, the Mantra ‘Om Namah Shivay’, seven swaras: Sa, Re, Ga, Ma, Pa, Dha, Ni, which, is yellow and is Kriya Swaroop.

Aghor also has many forms like water, Chandra (moon), Samveda, Neerdhab, Upkaar, Dakshin-agni. Fifty letters from A to Gya, Icha shakti, its form which guards vikalp shakti with the help of kriya shakti and decimates all the great groups of sins and is provider of all kinds of grandeur.

Vamdev is the provider of great discrimination, form of effulgent fire, imbued with Light of Knowledge, always happy and shining like millions of Suns. It is of the form of Samveda, and eight swara (7+1) i.e seven swaras of Samveda and one of Bharat-shastra of low swaras like A, Aa, Am, etc., Ahvaniya Agni used in yajnas and its form which is capable of annihilation. It is white, Tamogun, fully realised creator of three Dham and three Dharmas, provider of good fortune to all, provider of all kinds of fruits to humans, equipped with A, Ka, Cha, Ta, Pa, Ta, Ya,Sha, the eight letters and which resides in the eight petalled lotus of the heart.

Tatpurush is the realm of Air, represents all the five kinds of fires, power of mantra, creator of mantra power and one who makes rules for it to operate. It represents all the fifty letters of varnmala, of the form of Atharv Veda, is the leader of various good qualities and the whole cosmos is his body. He is red in colour, is a beautiful medicine for mental and bodily diseases and is the creator, annihilator and controller of the whole cosmos in which all powers reside. Simultaneously, it is beyond the three states and dwells in fourth state of Turiya. It is called the Brahm, creator of everything and is continuously served by lord Brahma and Vishnu.

Ishan is the greatest of the rulers and creators/instigators, Sakshi of intellect, spread everywhere like akash (space), non-evident, embellished with the sound of Om. He is refuge of all devtas (divinities), at peace, even beyond peace, who is the creator of all 16 Varnas of Vishudhi Chakra and whose body is the sky. He is the doer of five kinds of work in which cosmic creation is one, he is knower of all the three divisions of time and is of the form of Panch-brahm. When Panch-brahm achieves Nirvan it enters its Atma and with its Maya annihilates everything. He is self-effulgent and self-created.

Bound by the spell of Maya of Lord Shankar, all the divinities, Gurus of the world are unable to know the cause of all causes, the Mahadev. That Paratpar Purush which is and which lights up the whole world, his form cannot be seen with these eyes. Because of whom this creation is lighted and when it annihilates, that Brahm is at extreme peace. It is that Parampad form. These Sadyojat etc. are the five Brahms and whatever is seen in the world or heard is also Brahm. Understanding of these five forms is called Brahm-karya and by knowing it one reaches Ishan. All the wise knowers, merge these five Brhams in their own Atma and if they realise that they themselves are that five form deva then they qualify to drink the Nectar. One, who realises the Brahm like this is set free, there is no doubt about it. Equipped with five letters, one should remember the mantra: ‘Namah Shivay’, in the beginning of which is letter ‘N’ and in the end is letter ‘Y’.

Knowing that everything is comprised of Panch-brahm, one should see Panch-brahm in the whole creation. One who, with great devotion, studies Panch-brahm Vidya, he himself becomes That and gets nearness of That. This knowledge was given by Mahadev himself to Galav Rishi when he showered His grace on him. Just by listening to his greatness, one gets the knowledge (as if one has heard of what one has not heard even). One gets all kinds of knowledge, whether known or unknown. The principles, which are not even known, also become known.

As by knowing one clod of earth one knows every thing which is made of such material, because cause and doing (karya and karan) are one, in the same way by the knowledge of Pach-brahm, all knowledge is known. By knowing iron one gets knowledge of everything made out of it; by cutting one nail one gets the knowledge of that which cuts it because it is natural that similar things will not be different. Because doing which is not different from the cause, is actually a form of the cause itself. If an object is taken as one alone, this is also untrue as we see different things in creation. But the actual cause is only One, but generally sometimes it is taken as one and at some places it is taken as many.

Differentiation which is perceived at various places is because of the absence of an explanation or ignorance of Dharma. Hence the cause in actuality is one and not dual. The cause of this whole world is nothing but that pure, One Chaitanya. It resided in this body in the place called Dahar, also known as the Lotus. Moksha seeking Sadhaks should look for Shiv, who is truth and Anand, there only. This Shiva is always established in the heart and is the Sakshi (witness) to all. Because of this alone, the heart is called the provider of Moksha (liberation) from this world. Thus ends this Panchhbrahmopnishad.