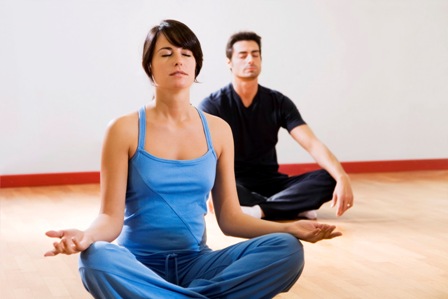 Now, for the yog sidhi of yogis, Yograj is being explained here. It comprises of Yog, Mantra, Laya and Raj i.e. all the four. Seers have explained it as four different aspects, Asan, Pran, Dhyan and Samadhi. These four are there in all kinds of yoga. A Brahmin should do mantra jap of Brahma or Vishnu or Shiva. Vatsraj succeeded in mantra jap while Vyas etc. succeeded in Layayoga. Mahatamas transcend all the nine chakras to achieve sidhis.

The first chakra is like Bhaga with three circles and is called Brahm chakra. Near the anus is Moolkand which is called Kaamroop and is also called Vahnikund (fire pit) & Tattva Kundlini. For Mukti one should perform Dhyan of the effulgent jeeva here.

The second chakra is Swa-adhishthan which has been told to be located inside. On western side is a lingam which is shinning like a newly formed sapling. It should be visualised in Udyan peeth and the world should be attracted into it.

The third is the navel chakra in which is established the whole world. In the middle of five circles here one should do Dhyan of the effulgent electrified Shanti Shakti. Knowers, by meditating on it get all the Sidhis.

The fourth chakra should be seen inside the heart whose face is downwards. Effulgent Hamsa should be visualised inside it with all efforts. It is absolutely true that one who can meditate on it, the whole world will come under his control.

The fifth chakra is inside our throat on whose right is Pingla, the left is Ida and in the centre is Sushmana. By meditating on a jyoti (flame), in it one gets all spiritual powers (Sidhis).

The sixth chakra is in the palate which is the place of Uvula. It is called Rajdant and is the path way for the tenth door i.e. Brahmrandhra. By emancipating the mind in that Shunya one surely gets Mukti.

The eighth chakra is Brahmrandhra which is Param Moksha. By meditating on that smoky coloured space of all creation a yogi achieves Moksha. That which is blue and gives Moksha should be called as Jalandhar (located in the neck area). This ninth chakra is the place of space and is of sixteen petals. The centre of it should be called Samvid, Parashakti is located inside it. By meditating on that Poorngiri, a yogi cuts asunder all snares and gets free.

A yogi, who meditates on these nine chakras one by one, regularly, gets all Sidhis with Mukti. With the eye of knowledge also he observes two staffs which are thick like the flowers of the kadamb tree, all of them reach Brahmlok. By ripening of the upper Shakti and contraction of the lower one, thus by rising the middle Shakti one achieves great happiness, this is absolutely true.