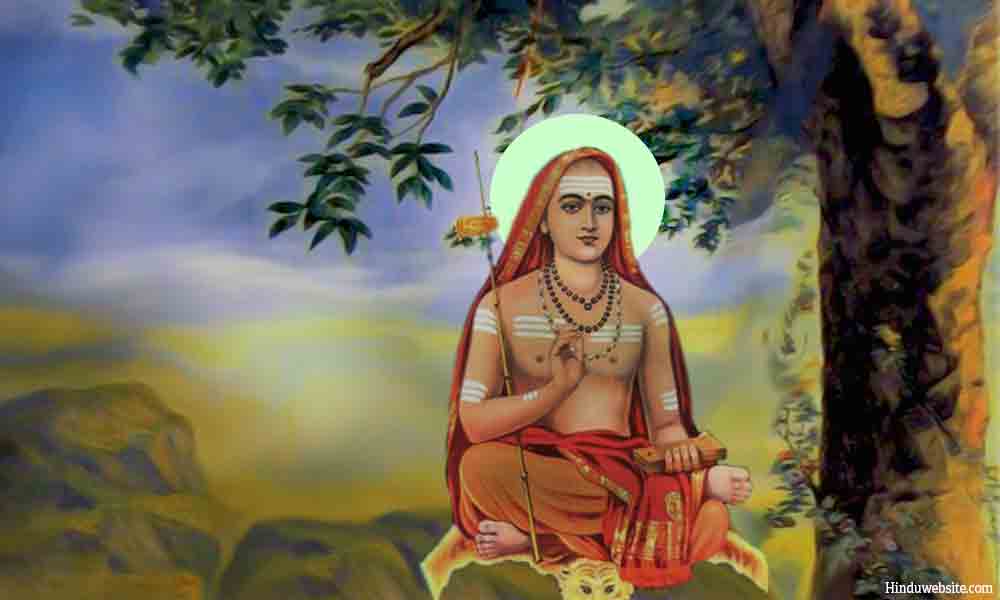 Now we talk on Advaitarakopnishat for those Sanyasis who are in full control of their senses and have ten qualities: i.e. sham, dam etc. Keeping one’s eyes open or closed, one should continuously meditate in the eye-brow centre that, ‘I am a form of Chit’ (Pure Consciousness). Thus dwelling on the sat-chit-anand, effulgent Brahm, one becomes Brahm itself. That which gets one free from old age, death, rebirth, annihilation and sins is called Tarak Brahm. Knowing Jeev and Brahm as Mayic, saying, ‘Not this, not this’ to the whole world, whatever is left behind is Brahm alone. In the middle of the body is located Sushumana Nadi, which is effulgent like a full-moon. It starts from Mooladhar and ends up in Brahmrandhra in the crown of one’s head. In the middle of it, resides the well known Kundlini Shakti, which is shining like a million lights and is extremely subtle. By having its darshan with one’s mind, one is set free of all sins. One who is continuously aware of the Inner Light in the forehead with the help of Tarak Brahm becomes a Sidha. Closing both ears with the help of one’s forefingers, one hears a sound. Fixing one’s mind on it, one should concentrate on the blue light in the center between the closed eyes, one experiences great peace and happiness. A similar Darshan is observed in the heart also. One should strive for such kinds of Darshans if one desires Moksha (Liberation).

Now, we will talk of symbols for the outer goal. At a distance of 2,4,6,8,10,12 fingers from the nasal tip, one should try to see the darkish bluish light , or mixed shade light, which comprises of yellow & white also. One, who can see like this, is a yogi.

To see light rays in sky with roving sight makes one a yogi.

When one can see hot gold-like light, at the ends of one’s eyes, then one should know that one’s sight has becomes stable now.

One, who can see a jyoti (Light) at a distance of twelve fingers above one’s forehead is called a Yogi.

Now, we will talk of the middle goal.

In the morning, one who sees the Sun with it colours, effulgent like fire, stable, completely round, that yogi becomes Nirgun Akash. (probably the Upnishad writer is referring to the inner Sun seen in Dhyan in the Chidakash by a practitioner).

Lighted by a shining star, the black space is called Parmakash.

Mahakash is effulgent with great light.

Suryakash shines with effulgence of millions of Suns.

Thus these five Akash, spaces located outside or within are the goal of Tarak.

The goal of Tarak is to provide the fruit of sadhana sans mind.

Thus, this Tarak is of two kinds, Poorvardh and Uttarardh.

We see, Sun and Moon, in the balls of our eyes. Like we see the outer world with the help of the eyes, in the same way by meditating in the middle of the skull, we should have Darshan of Sun and Moon. One should meditate on both of them as one because if we do not do like this, it will be extremely difficult for us to wean our mind off the worldly objects. Hence, a sadhak should use the inner gaze to research on Tarak.

Taraks are of two kinds, Moort (with form) and Amoort (without form). That, which is at the end of senses is formless and that, which is outside both eyebrows is with form. For explanation of other things, one should always use one’s mind. Mind endowed with realised truth when it concentrates inward, then above both the Taraks, it perceives the Sat-Chit-Ananad form of Brahm. One should know That Brahm, with the Inner-sight of the eyes endowed mind. Ammort tarak is also known through mind, which is equipped with eyes. As to perceive any form, mind has to take the help of eyes in the outside world, the same is true with the Inner Darshan also. Hence, the mind associated with eyes can have knowledge of Tarak.

The purpose of Tarak yog is to see Light above the Inner space in between the eyebrows. Hence, keeping one’s brows a little up, one should try to see this Light by keeping mind and Tarak together. The second part is called Amanask.

Above the soft pallet in the throat is the Realm of Great Light. This is the goal of yogis. Anima etc. Sidhis are acquired here only. When one’s gaze, to see in and out both, becomes focused then Shambhavi Mudra in acquired. The place where such a person lives becomes pious just by his presence and all who get even his Darshan alone, also become pure. Whosoever does poojan of such a yogi qualifies to have Mukti (deliverance).

Such a person is a Vishnu Bhakta, a knower of yog, a practitioner of it, is pure, keeps full faith in the guru and dwells in the form of Paramatma (the subtlest indestructible Divine Existence). ‘Gu’ means darkness, ‘Ru’ means remover of darkness. Guru itself is Parbrahm, he is the Param Vidya, he is the Param movement, he alone is to be thought of, he alone is Parakshatha (ultimate limit), he is the greatest wealth. He alone is the best of the best teachers, who can expound this knowledge. By remembering it alone, one is set free of the world and the sins of all one’s lives are removed. All desires are fulfilled. All efforts bear fruit. One who knows thus, he alone is the knower of the Upnishad. Therefore ends this Upnishad.
Om! Shantih, Shantih, Shantih.